Note: I wrote this just after the fabulous photos came back from the Pluto New Horizons mission but only had a chance to post it now.

Once it was a round dot in the night sky, distant, cold, too small to be a planet, too far to be on one’s mind. It was a dead rock in space, accompanied only by a moon almost as large as itself, with whom it danced about their common center of mass. Discovered by American astronomer Clyde Tombaugh in 1930, Pluto was far less interesting than the nearer planets. It famously lost planetary status in 2006, being demoted to ‘dwarf planet’ after the discovery of similar-sized objects in the Kuiper belt. Science fiction writers dreamed up fantastic scenarios, such as Stephen Baxter’s lovely “Gossamer” (1995). 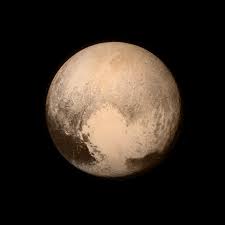 I was never all that interested in Pluto, which paled…