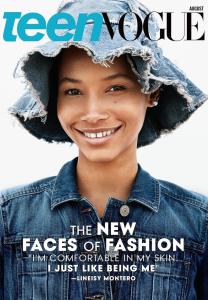 For Teen Vogue’s August Issue they’re introducing three new faces to their readers. Typical and no big deal, right? Wrong. The three models they have chosen to be the cover models of the August Issue are all models of color.  Aya Jones, Imaan Hammam, and Lineisy Montero are all new faces who are on the rise in the modeling world. Jones and Montero have both walked for Prada during Milan Fashion Week, while Hammam has been featured in American Vogue and in the Givenchy Spring/Summer 2015 advertising campaign.