Autistic – the word that I first heard applied to me my freshman year of college – it was weighted full of disdain, and I feared it. I feared it, knowing but little of the disorder I’d never really encountered, but had heard some very awful things about.

Autistic – the word that I learned more and more about, as I devoured everything I could read on the subject, which was just so utterly fascinating to me.

Autistic – the word that I learned explained the why of how I interacted with the world. The word that explained nearly everything that made me different from the people I was surrounded by.

Autistic – the word that gave me freedom from my fear and belief that I was just a completely broken person who would never succeed.

Autistic – the word that gave me power over myself and my environment.

The Overspill: when there's more that I want to say 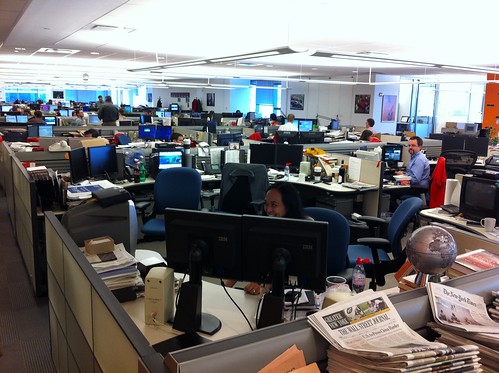 The Thomson Reuters newsroom. Note papers stacked all over the place. No idea if journalists and developers “sit together” here – but I’d bet they don’t. Photo by Targuman on Flickr.

I keep seeing people saying “you know how journalism and the internet can work better? Have the news org’s journalists and coders sit beside each other. Wonderful things will happen.”

Postscript, but at the top: this post generated a lot of reaction – so be sure to read the followup, which pulls together the many people saying that it can and does work./Postscript.

Let me tell you: when someone spins you this line, it’s pure unadulterated 100% bullshit. Anyone who says this has never looked at what happens when you do this, or considered the differences in work patterns between the two. (It pains me to point out that Wolfgang Blau is only the latest to suggest…